Estonia turned 100, and we have 10 perfect reasons to celebrate 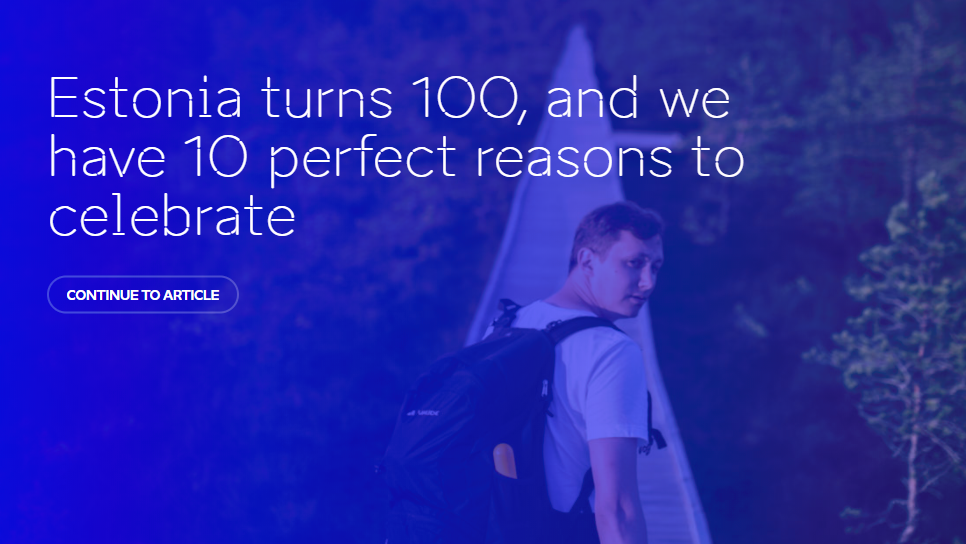 On February the 24th, the Republic of Estonia celebrates 100 years from when it became an independent country in 1918. E-Estonia has highlighted the main achievements reached during the last century, with a focus also on the best success stories that made us one of the most advanced digital societies in the world.

Estonia proclaimed officially its independence on 24th February 1918. On that day, the declaration of independence entitled the “Manifesto to the people of Estonia” was released by the Council of Elders of the Estonian National Council. Here is its first article: “All citizens of the Republic of Estonia, irrespective of their religion, ethnic origin, and political views, are going to enjoy equal protection under the law and courts of justice of the Republic.”

Estonians’ skills in large-scale automation projects, science, information security, and cryptography have old roots. These capabilities found some ground to grow and improve thanks to the establishment of the Institute of Cybernetics of the Academy of Sciences of Estonia in 1960

On 23 August 1989, approximately 2 million people from the Baltics joined their hands to form a human chain of 675 kilometers, connecting the way between the three Baltic capitals Vilnius, Riga, and Tallinn. This symbolic demonstration, together with the so-called “Singing revolution”.

Estonia wouldn’t be recognized worldwide as a pathfinder in the development of e-services if it wasn’t for the introduction of a digital identity for all its 1.3 million citizens.

Of course we are atalking about Skype, which main office is sitauted actually in Tallinn Science Park Tehnopol. Skype users contributed to the growth of the international call market share from 2,9 percent in 2005 to 40 percent in 2014.

In 2005 Estonia became the first nation in the world to provide an internet voting service for the general elections. Since then, the i-voting system allows all voters to express their preference directly from their own laptop without the need to go to any polling station, either electronic or traditional.

Toomas Hendrik Ilves, the fourth Estonian President from 2006 until 2016, impersonates the connection between the Estonian past and its future. He has been promoting Estonia’s IT development since the country restored its independence

After series cyber attacks in 2007 and 2008, the direct reaction was the creation of the NATO Cooperative Cyber Centre of Excellence in Tallinn, while the Estonian Government has been the first to test the application of KSI Blockchain technology to guarantee the integrity and the safety of Estonia’s data registers and the citizens’ digital records. Instead of 7 months, blockchain helps to detect data misuse immediately.

The e-Estonia environment got one of its last updates in 2014. The launch of the e-Residency program gave the possibility to every entrepreneur from every part of the earth to open a business in Estonia and access the benefits and services of the European single market without physically being in the country.

In the second semester of 2017, the international reputation of e-Estonia reached its peak during the first Estonian presidency of the Council of European Union. The main goal of the Presidency was to discuss how to enhance the potential of our digital single market at the European level, together with the free movement of data within the EU.